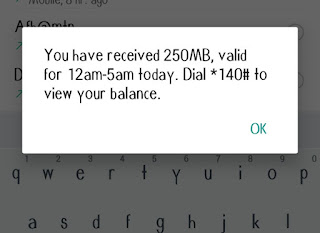 Airtel on the other hand, started the nightlife with 25Naira for 500mb and 50Naira for 1.5gb but later removed the 1.5gb option, leaving us with the 500mb.

Now Airtel has also review their smartTrybe night plan which use to be 25naira for 500mb has been reduced from 500mb to 250mb just like how MTN does recently.
I actually consider this as very little in this new age of heavy media files.

It is obvious these Telecoms are becoming strict with their data offer, firstly Hammer VPN unlimited was killed off as the server became annoyingly slow, then Glo stopped their precious 1.2gb for 200Naira, MTN also halted their Welcome back offer which gave 1gb for 200 naira , 9mobile 1GB for N200 package too is SIM selective and now airtel has followed the trend.

For now All we can do is nothing but to hope for better offers.