Glo special data offer is one of the most liked data plan among glo subscribers since its introduction last year. Many including my self have enjoyed and really took advantage of the plan. 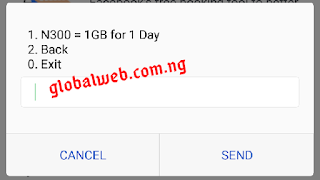 The plan was formally 1.2GB for N200 and valid for 3days which can be used to browse, download and stream online on all devices was recently discontinued by the network provider and disclosed in the social pages like twitter to introduce something different instead or even better.

Now the glo special data offer is back at a volume of 1GB for N300 with 24 hours validity. This unfortunately is less better  as compared to the initial discontinued plan; the volume and its validity is dicreased, while the cost increased as well.
Notwithstanding the plan is still special as compared to other plans from the other service providers. If you want to embark on the plan as it is, follow the steps bellow to subscribe.

How to Subscribe for Glo 1GB for N300 Special Data Plan

After that 300 naira will be deducted from your line you will be given 1GB valid for 1 day.
That’s all. If you have any questions use the comment box below. Any other glo data plan can be found by dailing *777#.